10 replies to this topic

has anyone played any of the dragon quest games

From Dragon Warrior/Quest I up to IX.

And yes I did.

Also, don't forget the manga/anime Dai: Dainobuken which was derived from the game.

sweet ive played 6 to 8. and i didnt know that

VII: The Journey of the Cursed King.

It's their first game on the nxt Gen Console i.e PS2.

it is so awesome

Actually, games like Dragon Warrior/Quest I and II along with Final Fantasy I, II and III which promoted the RPG scene in the following years. As well as the Non-J RPG Dungeons and Dragon game, on the same existing console; did its final goal in making a new genre, the Role Playing.

DQ/W 8+9 still exist in its old classic RPG Battle style. Which is also good for the old-people who enjoyed it.

And yeah, a Demo sums it all. Actually, I bought FF-XII along with DQ-VIII. Who knew it was ironic for having a demo.
The demo helped me play the original game.

thats what i did and i think the new battle system for FFXII is good. it kinda reminds me of FFX-2

I havent really tried dragon quest and it never looked appealing to me. It looked like dragon ball z which was something i never watched. it seems pretty popular in japan. does anyone want to fill me in about how it all works?

I havent really tried dragon quest and it never looked appealing to me. It looked like dragon ball z which was something i never watched. it seems pretty popular in japan. does anyone want to fill me in about how it all works?

What! This is an all time classic! If you were a teen back in the late 80s, and if you played Dungeons and Dragons and Final Fantasy, you are bound to know Dragon Warrior/Quest(of course, in these days we use... *coughs*emulators*coughs*)

It is not Dragon Ball Z. The fact is, it is both Koji Inada and Akira Toriyama(The author of DBZ) who are the illustrator to the games.

If you see the art of Chrono Trigger, it was all done by Akira Toriyama.

Even though Inada's and Toriyama's art are almost similar, there is a slight difference. In the DQ franchise, the artists are shifting.

In the Anime/Manga of Dai: Dai no Buken. It is primarily done by Inada.

Also, the battle system used by many Role Playing games are actually derived from DQ(I will refer to Dragon warrior/quest as "DQ" from now onwards) battle system. Even the all time star, Final Fantasy. Square Soft did his job well not to make a duplicate of DQ(that'ill be FF).

Some even says that this is the come back of the old Classic RPG Style gaming. Harbored in DQ VIII 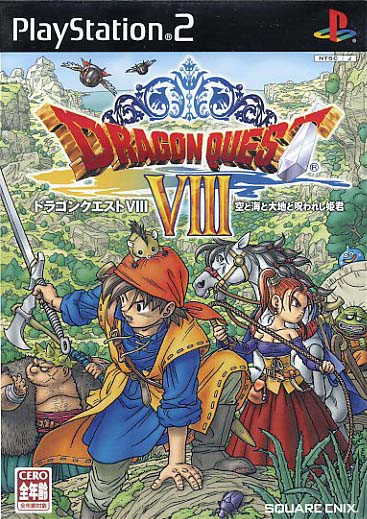 Edit: I forget that it was Enix's magic, and not square(thanks for the reminder, Lex)

This is an image of exactly the first of the series. Yes, there was some games that never became "Warriors" Like III,IV, V, VI. But they were always ported to SNES, PSX and now NDS. Now, you can find the old DQ and the newest DQ IX on NDS.

Oh wow. Thanks, I know now it has nothing to do with dbz, but then, when i was a child, i thought it did. Also dont forget Enix made dragon quest until square enix formed.

I have Dragon Quest 8 for PS2. Rhapthorne was so hard to finish off though. It took me a long time to beat him and at one point I even stopped playing the game. I just hated how I had to have everybody pray a few times just to get through the first phase. (The only game I've ever needed a walkthrough for besides LoZ for the NES.)

Life is but a handful of dust - ANTHM

3 Years Gone. Still missing you, my dear friend. R.I.P Tynielle Silvera.
Back to Other SE Games